The second evening in our new venue, Old St Paul’s in Jeffrey Street, got off to a prompt start when TME, David Dick, banged the gavel at precisely 7pm.

New members, Patrick Bundy and Fiona Savage, were given their first roles as Ah Counter and Timer respectively, and Graeme Buck took to the stage as Wordmaster /Grammarian with his word of the day anathema.

Ross McCallum was the Jokemaster with a very funny joke about a preacher, his wife and 3 eggs, and if you want to know the punchline, contact Ross – my lips are sealed. 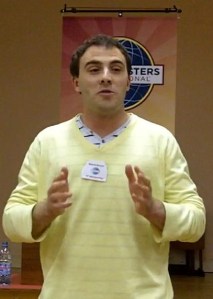 Ritchie Brown was the first speaker and in his CC4 speech – Three Delectable Delights of Singapore –  took us on a tour of some of his favourite spots in Singapore.  Ritchie’s speech was evaluated by Linda White, a guest from Trojan Speakers in London. 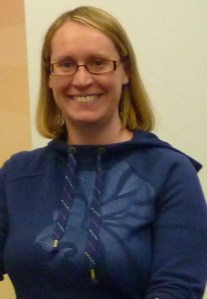 Johanne Burns, also delivering a CC4 speech – Night Night – told us a story about a child, a dream, and her grandma.  Pauline Dix evaluated Johanne’s speech.

I tackled the first project in the Speciality Speeches manual, Impromptu Speeches. I had to give my evaluator Eileen Scott, 5 speech topics I thought I could speak on and she had to choose one at random. The first time I heard my topic was when the TME, David Dick announced it. I was relieved to hear the title Setting Up A Blog.

If you are an advanced speaker who has become too comfortable in your speaking, I heartily recommend this project.

After the break, Brian Duffy, in his role of  Table Topics Master solicited some advice about furnishing his new 3 storey townhouse.  Brian was advised to install wooden floors, a futuristic entertainment room, a self-cleaning bathroom in the form of the sea (not too bizarre as he lives in Prestonpans), and a luxury bedroom scented with candles from The White Shop.

Kevin Mackay evaluated the Table Topics and awarded the Best Table Topic ribbon to Alex N, one of our guests who had weighed up the pros and cons of living in the town or country. The town won.

Duncan Thompson evaluated the evening in his role as General Evaluator.

After the meeting, some of the members and guests go to a local bar for a nightcap or two. It seems we have settled on one not too far from the new venue and it’s aptly named The Waverley Bar in St Mary’s Street.  When I was looking for the address I came across this link which gives you an idea of the bar’s extensive history. To give you a taster, the review begins Don’t be fooled by its somewhat disheveled appearance – The Waverley Bar is a bit of an Edinburgh institution.   Read more at http://www.theskinny.co.uk/venue/7437-waverley_bar

The next meeting is on 1st November.  Hope to see you there.