Over 25 members and guests attended the meeting last Thursday – not bad, considering many people, at this time of year, are out enjoying the Festival or on holiday. One guest, at the end of the meeting, said it was the best free fringe entertainment they had been to.

Ritchie Brown was the TME and with his team of role-players – Brian Duffy (Ah Counter), Declan Colgan (Timer), and Patrick Bundy (Wordmaster/Grammarian) – made sure the evening ran smoothly.

Alex Nuth delivered her CC3 Singing in the Street – and she does, literally.

As part of the Edinburgh Complaints Choir (no, I didn’t know about them either), Alex has been taking to the streets of Edinburgh with other songsters to voice their complaints, in song. Here is a clip of the choir complaining, and one of the things they were complaining about was – you’ve guessed – the trams.

This video has been removed.

AJ Cullen evaluated Alex’s speech with a good balance of commendations and recommendations.

The Humorous speech education session went so well at the meeting on 8 August, despite the technical problems, we decided to run an Impromptu Speaking session too. Like the Humorous Speech session, we used speeches from the District 71 Flourish Conference in Glasgow 2011.

We watched three table topics and the audience judged them, using the official judging ballots. We followed this with a discussion to see what we could learn from such top quality table topics.  According to feedback during the interval, members and guests enjoyed both sessions and managed to glean some speaking tips from them. 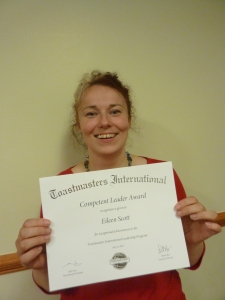 Richard McMahon, the club’s VPE, conducted club business and presented SAA Eileen Scott with her Competent Leader (CL) award. If you want to remind yourself of what that award is, go to CL Award.

After the interval, David Dick ran the Table Topics session on the theme of ‘recommendations’.  The topics were simple and straightforward, and allowed speakers to stay on topic – one of the important criteria for contestants in the Table Topics contest.

Duncan Thompson evaluated the TT’s and awarded to Best Table Topics ribbon to one of our guests, Umar Farouk. Umar was visiting the club from the US and is a member of Destin Toastmasters Club in Florida.

General Evaluator Eileen Scott gave a brisk but thorough evaluation of the evening and the meeting ended on time.

The next meeting is on Thursday 5 September at 7pm, back at our usual venue Old St Paul’s Church Hall, Jeffrey Street Edinburgh. If, over the past 6 weeks, you have forgotten where the hall is, the directions are here.