The club is moving to a new venue. 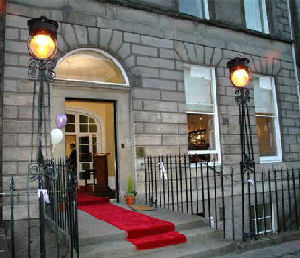 It’s very central, just 5 minutes from Waverley Station, across the road from the Bus Station (East Elder Street exit), and on the tram route.

We moved because we listen to our members. Old St Paul’s Church Hall served us well – it was spacious, inexpensive and had excellent catering facilities (large kitchen).

But members complained the heating was erratic, the hall was too big and the accoustics weren’t great.

The search began and was on the agenda at every committee meeting for months.

Aideen, our VPM, tirelessly tramped the streets of the Old Town and visited nearly every hotel she passed. She popped into pubs and anywhere that looked as if they might have a suitable room.

In fact, the whole committee was on the lookout for a possible venue. And, although there are plenty of meeting rooms in Edinburgh, the problem was always the same – the high cost. Paying more for a room normally means clubs have to consider raising the members’ dues.

We didn’t want to do that so the search continued.

The room we will be holding our meetings in is spacious, bright and warm, and it has its own little kitchen. Most importantly, the rent is such we won’t be raising the fees.

For directions and a map go to Directions.

All of the members on the committee sincerely hope you like the new room and, as always, we look forward to your feedback.

And, after telling you all about the new room, I have to also tell you that although w will be moving to the hotel, we will not be meeting in our own room on the 9th January!

For the 9th January meeting only, we will meet in a smaller room in a hotel – don’t worry it will be clearly signposted. At the next meeting on the 23rd January, we will move to our new room.