The Waverley club is already five years old but a chance meeting by the Scott Monument reminded me how young we are compared to the name itself.  It also set me thinking about our club. 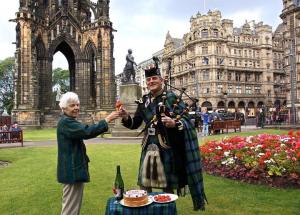 The photograph shows me toasting “Waverley” with Jenni Calder who has edited the novel “Waverley” written by Walter Scott 200 years ago.  Walter Scott went on to write 28 novels in all, known collectively as the “Waverley Novels”.  His fame spread far and wide and influenced many 19th-century authors.

As a result the name “Waverley” became part of Edinburgh’s history, with the railway station and various hotels and clubs also adopting the name.  We can therefore claim to be in good historical company.

Further comparisons are interesting too.  The railway company tries to run its services on time and so do we.  The hotels of that name aim to offer a good welcome to guests and to make them feel at home and so do we.

However, I believe we are one up on Walter Scott himself.  Jenni Calder told me the reason she edited this work was to make it less verbose and therefore more acceptable for the modern reader.  In those days there were no such things as editors, and authors were free to be as wordy as they liked.  In our club we have the benefit of guidelines and mentors to avoid unnecessary verbiage and get to the point.

On this basis might we be justified in renaming the club “Waverley Plus”?