President Neil MacLure welcomed everyone present, with a special thank you to the guest judges from Capital Communicators and Haymarket Toastmasters.

Ritchie Brown was Chair for the Humorous Speech contest, introducing each of the speakers in turn and briefly interviewing them whilst votes were counted.

First to speak was Eileen Scott, with a speech entitled “I can do it”, in which she confessed to being obsessive-compulsive when it comes to DIY. Eileen shared some of the calamities that have befallen her when attempting DIY, including breaking her foot, and varnishing herself into the corner of a room opposite the door! Eileen blames her obsessive-compulsive DIY on her father’s hobby/compulsion, and recalled several of his ventures, including constructing a home-made camper van, and his well-meaning but eccentrically-built greenhouse. Members learnt more about Eileen during her interview when she confessed to a love of board games, an interest in (fictional) vampires, and her agreement with Carl Jung that “’it’s better to be real than good”.

Paul Bailey then gave a speech entitled “Die laughing – funerals are fun”. Paul expressed his desire that he – or at least his mourners – should have fun at his funeral. With an audio-visual accompaniment, Paul then illustrated how the traditionally sombre mood of a funeral could be challenged with bright music, colour, and even tailored coffins of (extremely untraditional) varied designs. Paul finished by reiterating his belief that having a good laugh is a good thing – even at a funeral. Congratulations to Paul on third place. During his interview, Paul told Ritchie of his long term love of cricket (although nowadays not so active playing it), watching football, and rooting for “little people” against oppressive authority.

Moira Beaton then spoke on the theme of “Great journeys start with a single step”. Moira began by admitting to having Lack of Orientation and Spatial Topography – she is frequently LOST! Moira told of her ability to get lost anywhere, and how she had once given very detailed directions to someone in the street, but had then sent them off in completely the wrong direction! She also told of successfully navigating her way around the streets of Leith to a restaurant, only to realise that, all the time, it had been next door to the shop she had just been in! Moira then invited the audience to ask themselves if they were fellow sufferers, and appealed for them to show compassion to those afflicted. During her interview with Ritchie, Moira revealed she is thinking about getting a dog, and told the audience she likes to cook Middle-Eastern food as well as enjoying reading and photography.

The next speaker was Mark McCulloch who gave a speech entitled “Bucket List”. Mark began by explaining the idea of a bucket list (everything you’d really like to do before you die or “kick the bucket”). Mark then recounted one experience that brought him close to “kicking it” before his time, when he and his girlfriend went tandem skydiving in New Zealand. Mark spoke of his unease at having to sign a disclaimer so that the company would have no legal responsibility in the event of his death … and how his unease increased when introduced to his skydiving buddy – ‘Crazy Dave’! After being given a ‘helpful’ push by Crazy Dave out of the plane at 12000 feet, everything went well until after the parachute opened, when they began to spin, causing Mark to see his breakfast for a second time! Mark survived intact, and now has only 99 other things on the list to tick off! Congratulations to Mark on first place. Mark will now represent Waverley Communicators at the Area Humorous Speech Contest. During his interview with Ritchie, Mark admitted that he was the British Universities Pool and Snooker Champion, and that he is inspired by risk-takers. 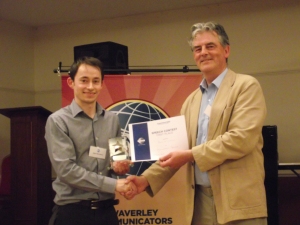 Finally, Alvis Lotuzas spoke of his youth as a “Terrible Kid”, telling of the great enjoyment he had got from annoying people, including throwing things at cars. Having been unable to avoid the consequences of throwing stones at cars (infuriating drivers), he realised that you shouldn’t damage other people’s property, nor should you run straight home where the car owner can chase you and tell your parents! Instead, Alvis turned to throwing rose hips at cars: this didn’t cause damage but would still infuriate drivers. Alvis told of one occasion when he and his friends were the subject of a particularly frenzied driver who resorted to physical punishment. From this Alvis learned to run faster and always say your parents aren’t home! Then if you are caught, you’re less likely to be dragged home to face them! Alvis concluded by saying he had no advice for parents with similarly unruly children! Congratulations to Alvis on second place. During interview, Alvis told Ritchie how he used to cycle for fun as a way of exploring Edinburgh, however nowadays he uses it more for commuting. He also enjoys wild swimming, and spoke of his enjoyment at swimming in the not-too-chilly waters of Loch Lomond.